In medical terminology, hydrocephalus is a condition where excess fluids accumulate in the skull and put pressure on the brain. As a result this condition can lead to serious complications. The procedure often needed is what they call a “shunt” and it creates a way for these excess fluids to be redirected out of the minor recess between the brain and the skull so no excessive fluid pressure is problematic.

God seems to show us much about spiritual realities with the physical world. Pride or “having a big head” or “swollen ego” is a lot like this, except it is a spiritual form of hydrocephalus! It can create problems for us and our walk with the Lord and others and paralyze our usefulness in the Christian walk!

The Apostle Paul in 2 Corinthians 12 speaks of a “Thorn in the Flesh” and from the sound of it, it became like a spiritual shunt to drain away excess pride!

“or because of these surpassingly great revelations. Therefore, in order to keep me from becoming conceited, I was given a thorn in my flesh, a messenger of Satan, to torment me. Three times I pleaded with the Lord to take it away from me. But he said to me, “My grace is sufficient for you, for my power is made perfect in weakness.” Therefore I will boast all the more gladly about my weaknesses, so that Christ’s power may rest on me. That is why, for Christ’s sake, I delight in weaknesses, in insults, in hardships, in persecutions, in difficulties. For when I am weak, then I am strong.” 2 Corinthians 12:7-10 –

Paul on another occasion says, “For Christ did not send me to baptize, but to preach the gospel—not with wisdom and eloquence, lest the cross of Christ be emptied of its power. [1 Corinthians 1:17]

Often God has to empty us of our own vain self sufficiency and trust in our resources and might in order to fill us with His even greater power. We always must leave room for him and not let self eclipse his bright glow! 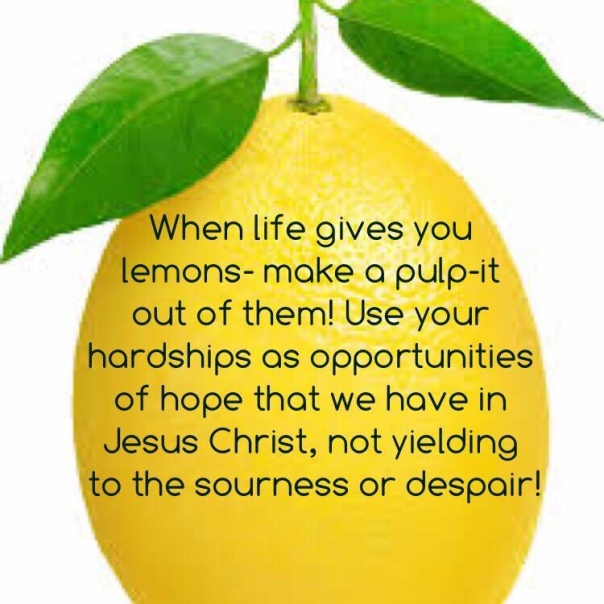 If God was to deliver us from hardships as fast as we would like, it would be like taking a weightlifter out of the gym and expecting him to look all bulked up- so in times of hardship, strain and challenge as believers in Christ we can look at it a different way because we know God is training our spiritual and character muscles to become stronger and better conditioned! Troubles come on everyone and sometimes life is so hard that some despair and end it as a result! And the Christ follower is not immune to hardship either and in someways standing for Christ will mean in a sense, greater opposition, yet there is joy! There is a joy in becoming a blessing to those who are suffering because of our hope! There is a joy in knowing God is in control and loves us and saved us, so we can inherit his promises, favor and eternal life after! There is a joy in knowing that no matter how dark things seem, the same God who allowed hardship is good and can once again bring us into the light of day again, after we have learned what we needed to in the shadows of night! There is the joy in knowing that through his light burning in your and my heart in the darkest places, many may also see and too turn to Him! There is a joy that hardships can be the materials he uses to make us better blessings and more able to be useful instruments of healing, and our hearts can hold more love after he has shaped us on the wheel of adversity! Who has ever been a great and compassionate person who has been spoiled in luxery and never suffered pain, loss, heartache or sorrow? Who has ever been a strong shoulder to lean except someone who knows the strain? To lean on the spiritually obese that have been fattened with life’s cakes and candies only shows to topple them over also!

The joy of knowing that He is with us in these times of sorrow and grief and hardness and lack, he is able to be sweet to the soul and strength to the heart!

Humble yourselves therefore under the mighty hand of God, so that he may exalt you in due time. Cast all your anxiety on him, because he cares for you. Discipline yourselves, keep alert. Like a roaring lion your adversary the devil prowls around, looking for someone to devour. Resist him, steadfast in your faith, for you know that your brothers and sisters in all the world are undergoing the same kinds of suffering. And after you have suffered for a little while, the God of all grace, who has called you to his eternal glory in Christ, will himself restore, support, strengthen, and establish you. To him be the power forever and ever. Amen.

During seasons of testing- the Lord seems to take what I have build, planted, sown and scattered in his name and allow fires to come against what was build, wind to blow against every structure and design and indeed some of it seems to collapse- and it is almost as if he says, “See there was a weak spot in your love, your faith and endurance and patience. Now rebuilt stronger then before, fill the gaps better, fasten that beam more tightly and add more bricks upon the out wall so that these winds and fires do not destroy the work of your love, faith, patience and things I call you to build.” Yes I feel there is many weak points and some of the material needs to be refined more! What good is a love that cannot handle the heat of hate, insult, persecution, and unfair accusation? The world loves in a house of common wood and when fires of others wrongs burn against it, it will be burned to ash, yet the Lord wants our love, faith and character he seeks to build in us to be able to be with each year more and more durable and less and less demolishable. I can say I am not a perfect man and there is weakness in me, my love is not a perfect work, my faith is not the strength of steel, my endurance is not limitless nor my patience as long range as it should be yet I know when I press on to greater and greater he makes it grow stronger!

I really am beginning to see so much lately and continue to pray that I have his grace to fortify what he wants me to!

This king had a wee bit of an ego as we see, or, larger than life one that caused him to make a giant statue of himself he ordered all to bow to.

The three godly men though chose not to bow or violate God’s law, and in our day there are also people who want others to bow to their pride and purposes. By nature when sin rules, it is “My way or get out of my way!” Yet these three God-fearing men chose to obey God rather than the Babylonian king!

How did ole Nebby respond? He was furious, not just mad or angry, but enraged! He ordered they be thrown into the blazing furnace, and it be heated seven times hotter than usual!

None of us should also be surprised by doing what we know is right and suffering the firey anger of those who want their way and are used to people bowing to them. Yet God allows us to suffer the fires others can create for us, yet take note- the ropes that bound them were the only things that burned up! So it is to with the one who trusts the Lord Jesus Christ and walks by faith, yes we will go through fires of adversity yet we can also trust that these fires to will be used for our good- burning away every form of weakness and enslavement sin brought with the fall- it burns up mindsets that hold us prisoner and emotions that keep us hostage! And we win when we “submit then to God, resist the Devil and he will flee from you!” Peter writes!

So surrender to God’s will, means you become a victor through it when all else would become more the victim! Why can we boast with such strong confidence? Because it is the Lord who does it! He will do it! Yet we owe him to trust and submit in this process! “No one whose hope is in him will ever be put to shame!” As the Word says! So dear friends, trust God in your furnace because he is doing something marvelous in spite of the bad situation.