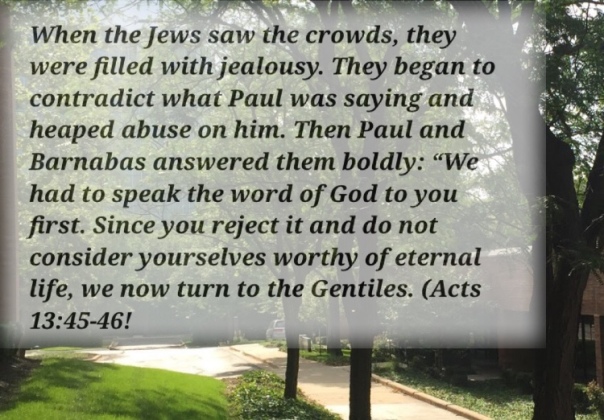 Fascinating passage, first we see part of the problem from the Jews in Antioch was “Jealousy” and I find that sort of amusing, because at first glance I would think the text may have blamed unbelief or aggravation- but the text specifically says “They were filled with jealousy” and the Jews seemed to envy the attention that they got from this new message that had been revealed through the early Apostles- and when the grew sorderly and stubborn and aggressive, the disciples left to go elsewhere.

Yet not long later this event happens:

Then some Jews came from Antioch and Iconium and won the crowd over. They stoned Paul and dragged him outside the city, thinking he was dead. But after the disciples had gathered around him, he got up and went back into the city. The next day he and Barnabas left for Derbe.

Yet Paul, get this, “He got up and wenf back into the city. The next day he and Barnabas left for Derby”

Haha as if nothing happened, and that same Holy Spirit that filled these men in Acts with power is the same Spirit that carries us through life today. Supernaturally enabling us to do whatever God has planned and giving us great boldness to face whatever we encounter. We must though receive God’s continual graces into our hearts and minds and let Him do all the heavy lifting. The disciples and Paul did not sit around feeling sorry for themselves, and feeling bad that they nearly got stoned to death. Paul, shook it off like nothing happened and powers on in the Lord’s strength. We too must have this same resolve because we serve a God and Lord that is far greater then whatever we face. His power can enable us with might on the inside even when stones are thrown from the outside!

Daniel was favored by the Lord, and throughout his life the Lord blessed him and watched over him. Yet there were times where he faced adversity.

Daniel excelled so much, the people he worked with seemingly grew jealous and resentful of him and the Scripture says:

“It pleased Darius to appoint 120 satraps to rule throughout the kingdom, with three administrators over them, one of whom was Daniel. The satraps were made accountable to them so that the king might not suffer loss. Now Daniel so distinguished himself among the administrators and the satraps by his exceptional qualities that the king planned to set him over the whole kingdom. At this, the administrators and the satraps tried to find grounds for charges against Daniel in his conduct of government affairs, but they were unable to do so. They could find no corruption in him, because he was trustworthy and neither corrupt nor negligent. Finally these men said, “We will never find any basis for charges against this man Daniel unless it has something to do with the law of his God.” (Dan 6 Vs 1-4)

They seemed to most likely that these men were jealous and did not like the fact Daniel was promoted over them. Insecurity or desire for control can be quite a point of contention. In workplaces people are often disgruntled when they are not recognized and these men felt most likely upset that Daniel who was an exile from Israel’s captivity and invasion managed to rise above them. So they plotted against him. They could not criticize his work ethic or integrity so they concocted a way to use Daniel’s faith in God to create problems between him and the king of Persia.

In the Persian law, if even a king made a decree, it could not be revoked. So the king had to follow through. However not even the king who was fooled into it wanted to do this.

“So the king gave the order, and they brought Daniel and threw him into the lions’ den. The king said to Daniel, “May your God, whom you serve continually, rescue you!” A stone was brought and placed over the mouth of the den, and the king sealed it with his own signet ring and with the rings of his nobles, so that Daniel’s situation might not be changed. Then the king returned to his palace and spent the night without eating and without any entertainment being brought to him. And he could not sleep. At the first light of dawn, the king got up and hurried to the lions’ den. When he came near the den, he called to Daniel in an anguished voice, “Daniel, servant of the living God, has your God, whom you serve continually, been able to rescue you from the lions?” Daniel answered, “May the king live forever! My God sent his angel, and he shut the mouths of the lions. They have not hurt me, because I was found innocent in his sight. Nor have I ever done any wrong before you, Your Majesty.” The king was overjoyed and gave orders to lift Daniel out of the den. And when Daniel was lifted from the den, no wound was found on him, because he had trusted in his God.” (Dan 6 Vs 16-23)

Daniel had God working for his behalf and what seemed like the end for him actually became God’s way to challenge those who wanted to take his life. Romans says “If God is for us, who can be against us?” And Daniel was faithful to God and risked his own life to not show more alliegiance to a king’s edict over God’s law. He did not deny his true King even though it spelled a death sentence. God miraculously preserved Daniel and honored him for his faithfulness!

“At the king’s command, the men who had falsely accused Daniel were brought in and thrown into the lions’ den, along with their wives and children. And before they reached the floor of the den, the lions overpowered them and crushed all their bones. Then King Darius wrote to all the nations and peoples of every language in all the earth: “May you prosper greatly! “I issue a decree that in every part of my kingdom people must fear and reverence the God of Daniel. “For he is the living God and he endures forever; his kingdom will not be destroyed, his dominion will never end. He rescues and he saves; he performs signs and wonders in the heavens and on the earth. He has rescued Daniel from the power of the lions.” So Daniel prospered during the reign of Darius and the reign of Cyrus the Persian.

Through this event also, Darius appears to turn to the Lord also! God was stil masterfully working out his plans inspite of opposition.