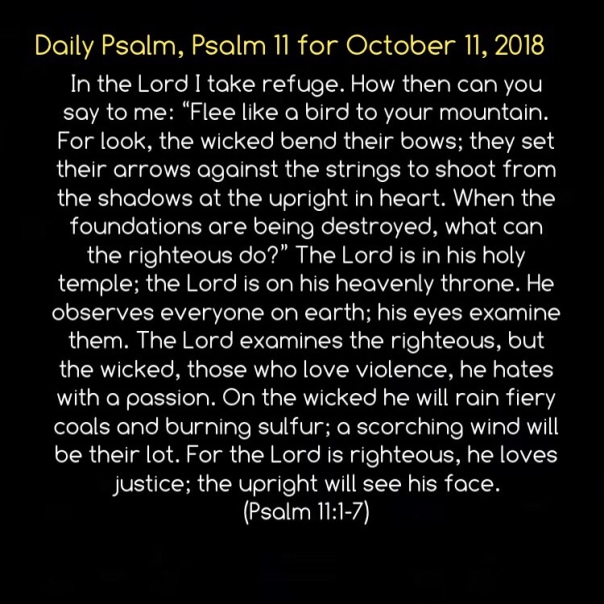 The Psalmist seeks refuge and security in the Lord from “The wicked” who “bend their bows” and “set their arrows against the strings to shoot from the shadows at the upright in heart.” This was written in times where archery was fairly widely used in warfare. However, we know that this is also metaphoric for how people use their tongues.

Their tongue is a deadly arrow; it speaks deceitfully. With their mouths they all speak cordially to their neighbors, but in their hearts they set traps for them. Should I not punish them for this?” declares the Lord. “Should I not avenge myself on such a nation as this?”

The Psalm goes on to say, “The Lord examines the righteous, but the wicked, those who love violence, he hates with a passion.” God hates sin and violence whether we use physical violence or sharpen our words to shoot like arrows. We are told in John 3:16 “For God so loved the World that he gave his only son so that whomsoever will believe in him shall not perish but have eternal life.”

So which is true? Does God love or hate sinners? Actually God loves even sinners but hates sin, and his hate for sin is so deep only Christ’s death on our behalf is a good enough atonement for sin. Those who fail to recognize his love though will perish in sin and be forever seperated from God and “On the wicked he wilk rain fiery coals and burning sulfer; a scorching east wind will be their lot.”

Yet the Gospel is God’s good news to even people who have lived sinfully because God through Jesus Christ invites us all to make peace with him and receive forgiveness we can never earn!

When the Lord confronted his nation of sin, he said something so fascinating

This is God’s invite to make peace with him and seek his forgiveness and generous pardon, or else we all will have to face him as Judge.

Just as people are destined to die once, and after that to face judgment, so Christ was sacrificed once to take away the sins of many; and he will appear a second time, not to bear sin, but to bring salvation to those who are waiting for him. (Hebrews 9:27-28)

God is very patient, that is why we who are loyal to him today and walk in his commands lived long enough to come to our senses and believe the Good News- this is what Gospel means!